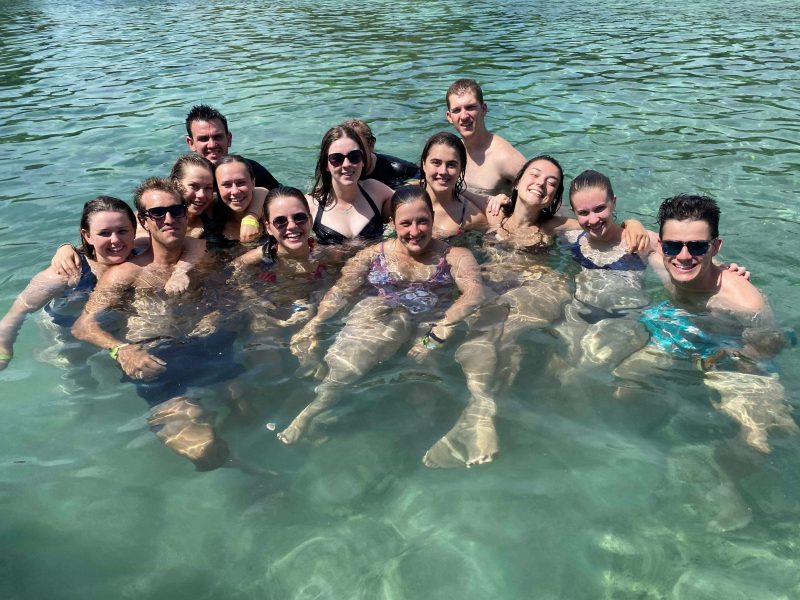 Here at yLead, we believe in the power of storytelling; we know that when experiences and memories don’t get captured, they fall through the cracks and sometimes end up lost. Melony Jones knew that it was time to challenge herself; stepping out of her comfort zone to adventure with us to Tanzania! We asked Mel to recount her experience in Tanzania with us… check out what she has to say!

What led you to Tanzania with yLead?

When an opportunity arose to finish the decade in a country as incredible as Tanzania, and with an organisation as inspiring as yLead, it was nearly impossible to say no to. Four years ago, in 2016, I sat in the back of an ASLC conference with a feeling of contentment and acceptance, knowing that this was exactly the place I felt as though I belonged. As soon as I watched the Tanzania promotional video, I remember telling my parents that I would do whatever it takes to get myself on that trip. Fast forward to 2018, I found myself in a lifestyle that did not ignite any sort of spark within me and I knew I needed to take action in order to make a change in my life.

Sitting at my computer, I brainstormed options of how I could get myself out of this funk, and then I remembered yLead. Reconnecting with the 3 day conference that I went on in year 12 remind me of how it changed my perspective and allowed me to be the best version of myself when surrounded by such a positive atmosphere. I came across the ‘Tanzanian Immersion’ information package & as soon as I finished reading it, I was on the phone to Lucy booking myself a spot for the 2019 trip. Knowing that yLead’s ASLC could have such a positive impact on me, I began to imagine what 3 and a half weeks in Africa with like-minded people could do. I wanted to be surrounded by others that see the world a little differently, and to find a place that I belonged with people who accepted me unconditionally, so from that moment I knew Tanzania was the right place for me.

How did you feel before the trip?

Before leaving on the trip, I will admit I was extremely nervous. I was afraid that the 16 others embarking on this adventure wouldn’t understand me, or that I wouldn’t fit in. It was the phone call I had from Nathan, my tour leader, who reassured me that we had an incredible group travelling to Tanzania together, and I for sure was going to get along with them. After that, I couldn’t wait to get on that plane and experience what I knew was going to be the best month of my life. Don’t get me wrong, saying goodbye to mum at the airport as she left me with 15 total strangers that I was about to travel across the world with was extremely daunting, but the second I started conversing with everyone, that feeling quickly turned into pure excitement.

”I am forever grateful for the connections I made with people on the mountain, for showing each other vulnerability and honesty gave me a sense of belonging I had never experienced before.

What did Kilimanjaro mean to you?

Reflecting on an experience as life changing as climbing Mount Kilimanjaro is difficult to put into words. I never knew just how big of an impact it would have on me, for the first couple of days I simply enjoyed the journey of travelling up a mountain as I got to know the incredible group of people I was yet to know much about. In the back of my mind, however, was a little voice inside my head constantly reminding me of my ‘why.’

Before I left for Tanzania, I was fighting a battle against negative self talk that I needed to overcome. The idea that I could leave that behind, amongst other aspects of my life that were not serving me a positive purpose, at the top of that mountain could not have been a stronger motivator. We all wrote our mantras on water bottles, to provide a reminder that words can be powerful during challenging experiences, and I’m so glad I had this to constantly remind myself to “prove me wrong.”

I wanted to believe that I was 1000 times stronger than I once thought I was, both physically and mentally, and that I would get as high up as my body would allow me. Although this became harder the higher the altitude, I know that my why is what pushed me to summit to the top. There were times when I didn’t believe it, and the negative self-talk would creep itself back in throughout summit night, but without the support of the inspiring individuals I walked up with providing me words of wisdom and encouragement when I needed it the most, I wouldn’t have summited.

I am forever grateful for the connections I made with people on the mountain, for showing each other vulnerability and honesty gave me a sense of belonging I had never experienced before. As we stood together on the morning of New Years Day, watching the sunrise from 3720m into the clouds, I knew that everything that I once allowed to bother me suddenly didn’t feel so important anymore. I had this new family that I was experiencing the hardest yet most rewarding days of my life, and I didn’t want to have it any other way. Mount Kilimanjaro is my proudest achievement to date, and I will be keeping the memories and the journey itself very dear to my heart, but most importantly I thank the mountain and my rafikis that helped to begin healing the wounds I had been trying to recover from for a very long time.

Recount one of your favourite days from beginning to end…

Trying to narrow down a favourite day on the trip is almost impossible, however, if I were to pick a day that stands out the most to me, it would definitely be the second day of safari. Waking up to the most beautiful view at Highview Hotel, we departed early to drive into Ngorongoro Conservation Area for a huge day of animal sightseeing and getting to see the spectacular Ngorongoro Crater. As this was around the middle of the trip, the connections and friendships that had formed made every moment filled with laughs and unforgettable memories.

The group I spent the day with in our Land Rover, driving into the crater itself to witness all of the wildlife, just made the day even more enjoyable and full of positivity and fun. Holding on extra tight to the sides of the car as we drove over bumps and around bends became a challenging game for us, as we also attempted to capture the amazing animals along the way. Hippos, Zebras, Giraffes, Warthogs and even a couple of Lionesses were just some of the animals we were lucky enough to see, and it felt like a scene right out of ‘The Lion King.’

Not thinking the day could get any better, after lunch we drove into a Masaai village within the conservation area to visit a kindergarten and play some games with the children. I can’t even begin to describe the wholesome feeling I had, capturing photos of the group interacting with the children as they played soccer in the rain, with a rainbow shining over us all in the near distance. I knew in that moment that it’s the little things in life that can often make us feel the most content and happy, and these kids were the perfect example to teach me such a valuable lesson.

Heading to our next sleeping destination, my car was the unlucky one that unfortunately got bogged in the slippery mud, and during the 45 minutes we were stuck inside as the other cars tried to pull us out, I definitely needed a distraction from the slight fear that our car was going to flip upside down. Luckily, I had an extremely supportive group of friends that continued to make me laugh and turn what I thought was a serious situation into a hilarious memory and new experience. After settling in at Ngorongoro Wild Camp, we finished off an unforgettable day, sitting on the balcony of the dining room watching a breathtaking sunset together, and I knew in that moment, I never wanted this experience to end.

Everywhere we were fortunate enough to explore in Tanzania was a heart filling experience, filled with contagious smiles and radiating energy from the local communities. For me personally, the most fulfilling connections I made were with the astounding Springlands Hotel staff in Moshi. From day one, we were welcomed with the most wonderful group of people that treated us like Tanzania was also our home. Every time I walked past an employee throughout the hotel, they always made the effort to say ‘Jambo!’ no matter the time of day, and also were extremely passionate about teaching me a new phrase in Swahili, or just to say what’s up. Although such a small gesture, these were moments I now hold very dear to my heart.

I feel so blessed that I got to meet Tanzanian locals that are so proud of their culture and the country they live in, and that is something we as humans can easily take for granted. We left Springlands multiple times as we ventured off to different destinations. Each time we were gone I couldn’t help but miss the staff back at the hotel that felt like home on the other side of the world. Coming back to the staff was always super exciting, as they would greet us with those incredible smiles and loving hugs. This meant that saying goodbye to Springlands Hotel was extremely difficult, however, I know how lucky I was to have the opportunity to embrace myself in African culture in the most humbling and exceptional way possible.

I’m forever thankful for everything they taught me about Tanzania and life’s important moments.

”Everywhere we were fortunate enough to explore in Tanzania was a heart filling experience, filled with contagious smiles and radiating energy from the local communities.

What would you say to someone that was nervous about travelling with yLead or exploring a unique culture?

It’s never easy overcoming the fear of travelling alone, particularly to a country as unique as Tanzania. I truly believe that having the opportunity to travel with a group of young individuals is a risk worth taking a chance on. I always felt safe when wandering the local streets and visiting villages because I had a group guiding me and assuring me I was comfortable. I also never would have accomplished something like Mount Kilimanjaro without the best support system I could have asked for.

Tanzania is an incredible place. The culture is something I have never witnessed before, and I will never take for granted how lucky I am to have been welcomed into their home with such open arms. Making a decision to travel with people from all around Australia can seem daunting at first, however travelling with yLead is an experience I wish to do all over again. Their remarkable way of connecting humans in the present moment through a shared experience has given me friendships and life lessons I know I will have for many years to come.